The headmaster at Manukwa School receiving a case of sports kit

We set off for our last trip to the bush with Mr Khunga squeezed in the back of the wagon with Max and Nick. He had left his village at 5 this morning to conduct business in town and got lucky. Our first port of call was to Manukwa School to see the headmaster and drop off some sports kit. We also wanted to catch our 5 orphans from Mawaso village who had not been at home when we last called. Summoned to the headmasters office I was able to deliver a major rocket as their school reports were simply dreadful. One was missing as she had completed her end of term tests and gone home. On to Kalemba school some 5 miles deeper in the area to again drop off two full sets of sports kit and football boots.

En route Nick was again able to call on his orphan boy and give him some of his sons cast-off football shirts. As we left the area it was time to say our farewells to the folk at Makhasa village, our children at Mercers kindergarten, Headman and Mrs Khunga and see if Max’s young Moringa trees that he had planted had survived the previous nights thunderstorm – they had.

A farewell at the kindergarten. 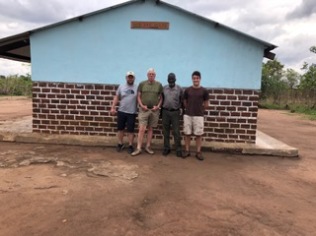 Headman Khunga and the team.

Evening spent downtown at a very basic Indian curry place but pretty good grub washed down with coke or Fanta – forgot it was a true Moslem establishment. It’s now lovely and cool at last with rain a daily occurrence Two days to go so we are nearly done.