Anodi and Emmanuel and their village mates with finger puppets Michaels mother made for everyone.

With four families still to see we set off early as I feared with the rains in full flow we might have some fun and I also decided to drive and give Stephen a taste of a back seat ride so he was reminded of what life was like over the bumpy tracks. As predicted it was fun getting to see Anodi, Emmanuel and Lingston sponsored by the Murcott family in Maidenhead. Their grandmother has a small farm holding at about the furthest reaches of the chiefdom. Michael and I were not to be disappointed with Stephen’s grunts from the back of the vehicle! Anodi and Lingston were to be found planting maize with some even smaller siblings – these kids are simply amazing and learn to work very early in life.

A catch the ring toy which I was incapable of doing until Anodi did it first time!

Anodi is a very bright young man and I was pleased that Emmanuel had lost his fear of the “white man”. Sadly Lingston was out in the fields and granny was attending a government meeting with all the villagers receiving their subsidised fertilizer certificates.

Giving Bridget a telling off for a poor report.

We then moved to the other end of our area to catch up with Joseph, James and Bridget Gama the children sponsored by our wonderful young girls and Netty in the church. Joseph is another grade 9 boy and therefore waiting to see if his results warrant further education – I personally doubt he will make it. James is doing moderately well but Bridget’s report leaves a lot to be desired and so received a serious nudge to buck up.

All the little ones that were given T shirts in the Gama village.

It’s a fun village this family lives in and as I had plenty of little ones clothes remaining lined up a gang and dispensed new tops to them. It was a joy to brighten their day as they are pretty much dressed in rags. Two families to go and failed again, so another trip required which will be even more interesting as it has rained almost constantly this past two days. To prove a point on our return journey we came across a car floating in a small creek which had been washed off the concrete ramp with six occupants including a baby in the car. Fortunately everyone got out unscathed. Watching the locals recovery skills left a lot to be desired but as there are no professional recovery firms human muscle has to be used.

Vehicle recovery Zambia style. This car was swept of the drift bridge with six people inside.

As Thursday broke I decided we would wait before venturing forth again and hope the rains  abate. It therefore became accounts and record checking day and Suzie will tell you it’s “wet towel round the head” day. Getting an up to date bank statement takes at least one if not two visits to our bank but Stephen is meticulous in his record keeping so I always leave happy that our funds are going to the coal face and being honestly and properly used. Supper was cooked under the watchful eye of Rachael as Michael was schooled into cooking nshima, the staple food at all meals. It’s made from ground maize cooked into a stiff porridge with water. We all had supper together with sides of pumpkin leaves done two ways, chicken pieces and gravy – yummie!

Because Thursday was a relatively restful day I knew Friday would be our last busy day in the tribal lands and so it proved. Michael and a team from Mr Khungas village laid out and dug, by hand, the entire foundations for small house to be used in the future for young visitors to live in the field working with the kindergarten and learning about village life. More about this initiative in the future.

While Michael was busy I went to visit one of our last two orphan families and success at last as the road to their village is on the cusp of becoming impassable. Manyoni and Peter Banda are two great young boys sponsored by Keith and Linda Tayler. Their father was killed in a traffic accident and then the mother died so are looked after by grandparents. We had a classic African meal with the Khungas and senior workers from the well project and moved on to see our two remaining well sites(1/2). On our way we saw the chief in his fields and hence an opportunity to brief him prior to our return. Again lo and behold gardens were full of maize and pumpkins. These are not working quite how I would like but are better than nothing so progress is being made ever so gradually. Our final orphan family was at last in from the fields and while Edward was scrumping for mangoes Memory, Chisomo and mother Rebecca were in residence. Chisomo is a real handful while his sister is a joy.

That’s it folks for this trip. We return Sunday via Lilongwe in Malawi and Johannesburg. 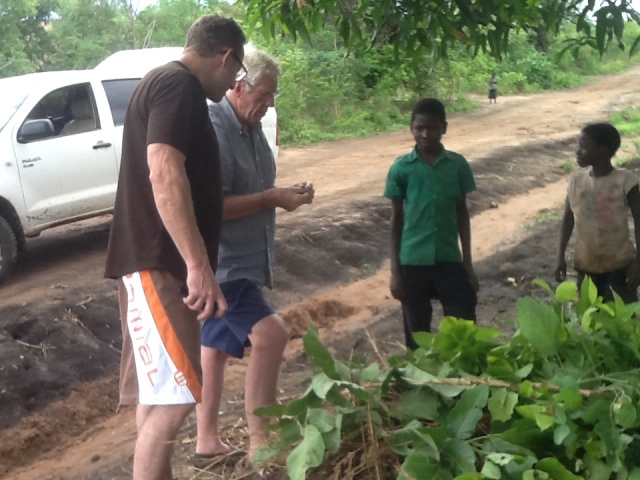 Showing Michael how the children catch flying ants which, fried, are a delicacy at this time of year.