Michael Brady and I are back in Zambia for our third working visit together and my seventh visit since launching Zoe Zambia in 2013. We again flew out via Johannesburg to Lilongwe to be met by our great Zambian representative Stephen with hugs and great excitement at our safe arrival. Three hours later we finally cleared the border into Zambia, two hundred US dollars poorer for visas and the usual lesson in patience and bureaucracy (a lesson I believe so well taught in colonial times).

Nercia, our wonderful retained housemaid, was waiting for us to take up residence in Zoe House, Chipata – twenty four hours after leaving Crowthorne!

A transition from 12c to 26c, the mains electricity having just been re-instated after being cut off for five days and no mains water to be had so a bucket in the bathroom for all the necessaries – welcome back! 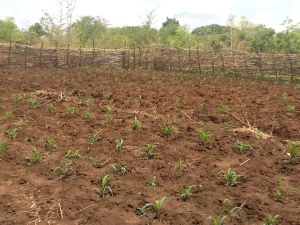 On Saturday our first port of call was Headman Khunga’s village and Mercer kindergarten. The gardens at Well 3 were so very encouraging. The ginger crop had recovered from the ravages of a goat herd attack in July(!) and was showing promise. Maize had been planted and was germinating in two patches, one having had our compost initiative applied and one without. This is a real test to see if all the youth efforts of generating compost will produce much better yields of maize compared to commercial fertiliser (this saves money). Mr Khunga had a very healthy patch of tobacco seedlings ready for planting as he waits for the rains to break properly and there was plenty of cassava in the garden. 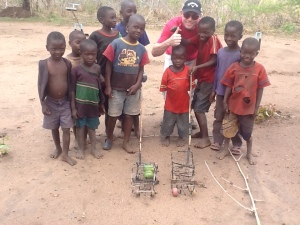 Michael and the kids with their little home made trucks to transport mangoes!

While school was not sitting many of the kindergarten children from all the surrounding villages descended and in no time Michael was again the pied piper of Makhasa village. We concluded our visit with a long discussion with the villagers on the advantages and disadvantages of growing tobacco as opposed to soya bean which is in very high demand, pays well and is generally easier and safer to grow than tobacco. We left the village to return to base with a great sack of mangoes (it’s not true I plan my visit at this time of year for the mangoes) which the older children had been despatched to collect straight from the tree.

On our return to Zoe house the mains water was still not restored but guess what – a good thunder storm broke so much to the amusement of the Ngwira family Michael and I took a shower in the rain so refreshed at last. 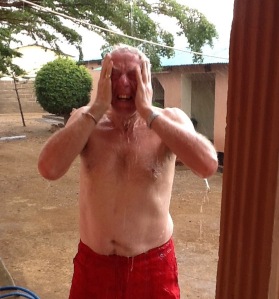 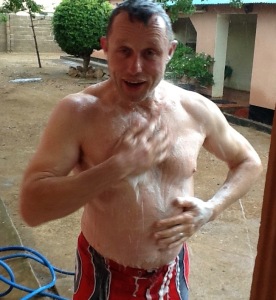 Sunday had been stipulated as a day rest so it was golf on the little 9 hole course on “Browns” in the middle of town at 8.0am, a coffee and pies lunch at the Spa supermarket and then off for an audience with Chief Manukwa which, with his blessing, sets in train our programme for the forthcoming two weeks. As I close our first report and we drive home a true tropical storm has struck with fantastic lightening and bucketing rain but guess what, the mains water is back on!!