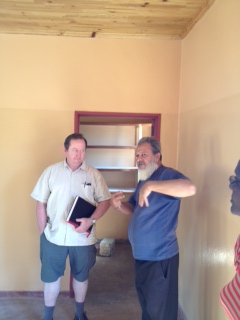 Chris In his element talking buildings

We went back to the British High Commission and met with the Deputy High Commissioner David Pearce and Dax Patel. It is important that the High Commission is aware of what we are doing as we are meeting with government ministers here. We fed back on our visit to date and they were pleased that we had taken the trouble to do such a thorough reconnaissance. We had seen so many different models of provision, and we would be considering these carefully when we got back to the UK. They encouraged us by saying that the British Government recognised when good work was done in Zambia by its ordinary citizens and they saw this as an extension of  government policy. They also spoke highly of the Zambian Ministries of Education and Social Welfare with whom we would be linking.

We met with Sepho Piri who is a local businessman. John knew his father David, who had recently passed away, who was a Zambian legend in the business and golfing communities. Sepho gave us some useful insights into the issues around creating an organisation in Zambia, and his mother was running a similar project. We need to avoid falling into the trap of creating dependency, which can be very damaging. Targeted support to those who are prepared to work to improve their situation would deliver better long term outcomes. We also need to consider issues like succession planning. He was aware of a project which had started well and ran for a number of years but had folded on the departure of a key individual. A clear and easy to follow operating model would help to avoid this.

We went for a curry and the are many good Indian restaurants in Lusaka. The manager introduced himself and we explained we were curry aficionados from England. He said we would not be disappointed and we weren’t.